Cast Iron is fun to play with over coals. It will not produce enough food or sides for a cookout involving more than 10 people, but it is fun and cool props if your cooking beside a campfire for a group. Practice it and perfect it before feeding others. You can't hurt the pan but you can burn off the cure if you let it dry out and burn. Google "cast iron curing" or "cast iron cooking" to learn how to care for it.  Curing takes a while and you have certain steps involved in cleaning and sterilizing them before storage. It's the original non stick pan.

I have a large set of CI for outdoor cooking. Cooking cornbread is nice, because it puts a little crispness on the bottom that makes it taste good. When serving in CI, remember that the pans are still hot and the food is still cooking when the pan is on the table. Forgetting that can ruin some corn bread. Obviously DON'T put a hot pan on a glass top table. I now have a 17" pan that is perfect for a 21.5" grill.

OK, here is some examples of CI cooking.

I cooked up a batch of bacon bits and I smoked some ham. 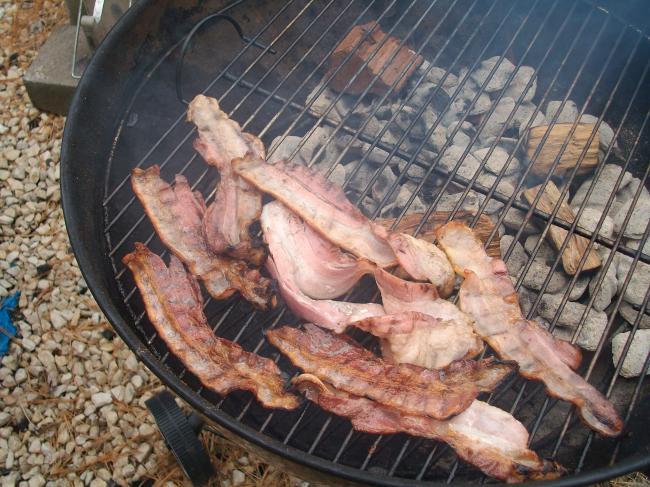 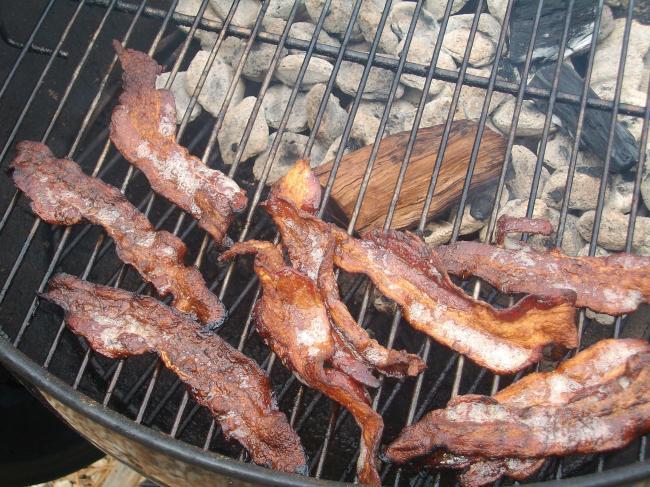 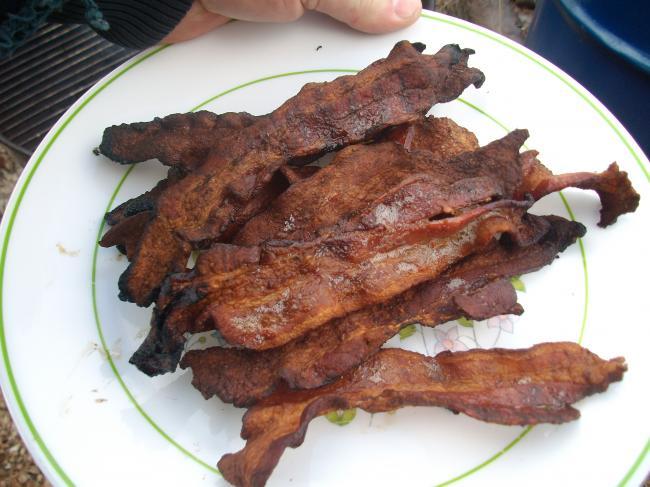 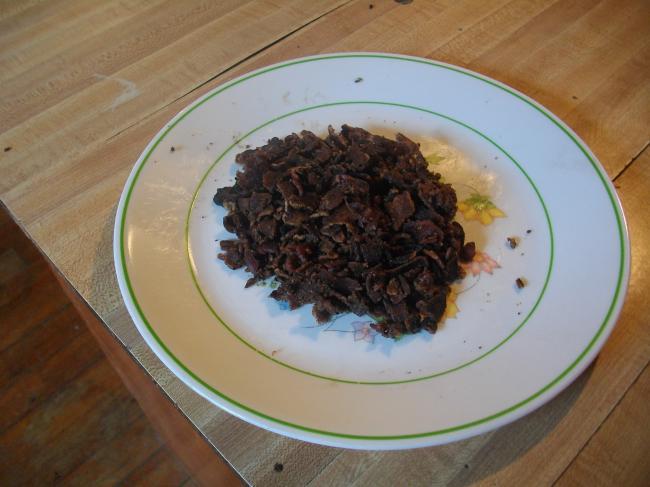 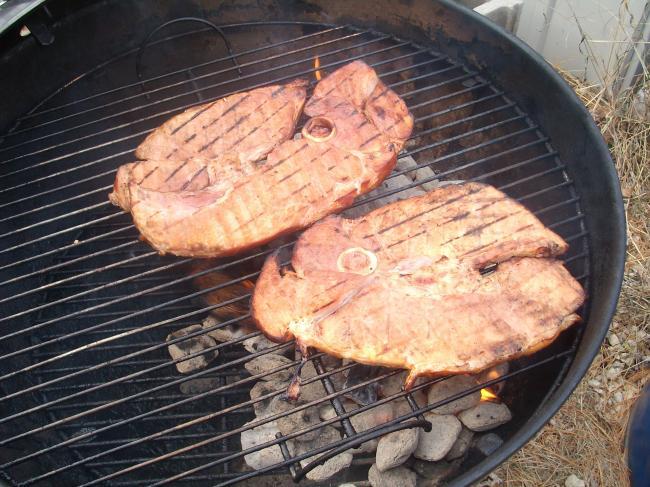 I started with The diced ham, milk, Italian parsley, heavy cream, cheddar cheese, salt, pepper and flour. I mixed in egg noodles and put it all in a 14" CI skillet with a package of "Kraft, Italian 5 cheese" shredded cheese on top. 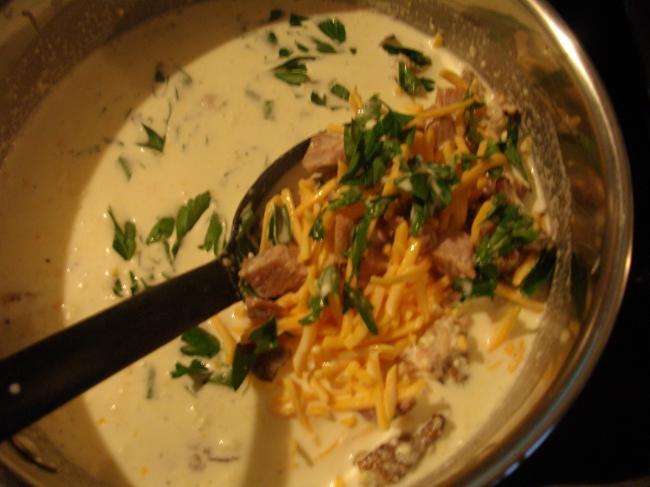 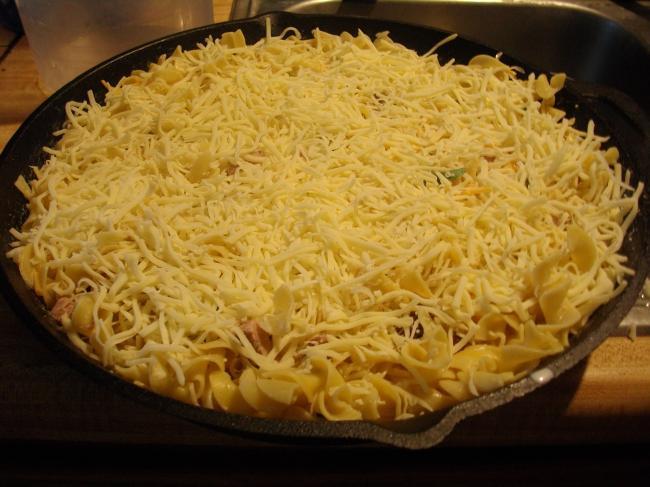 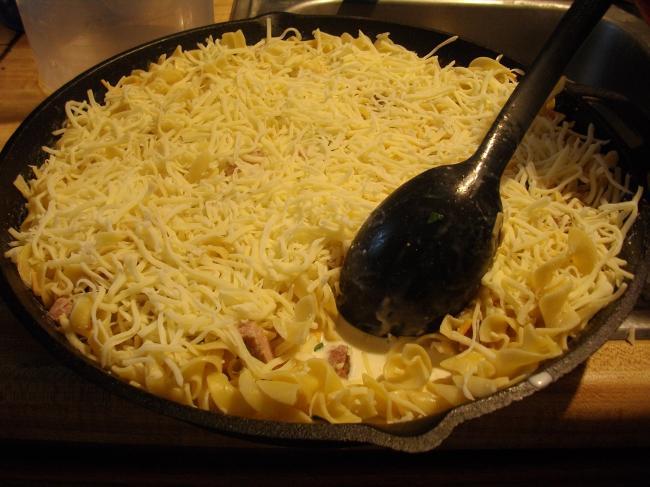 I fired up the UDS and cooked the dish over lump for 30-45 minutes. 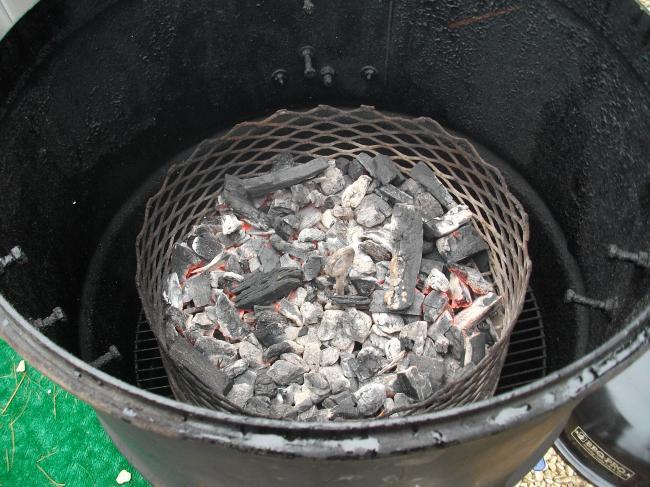 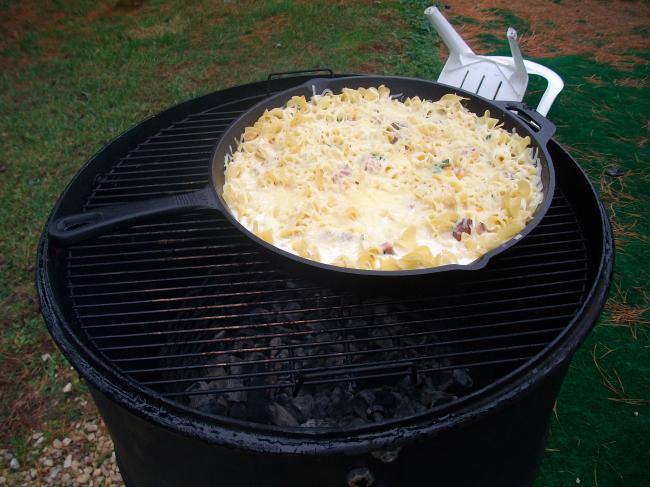 I added some of the bacon bits on top... 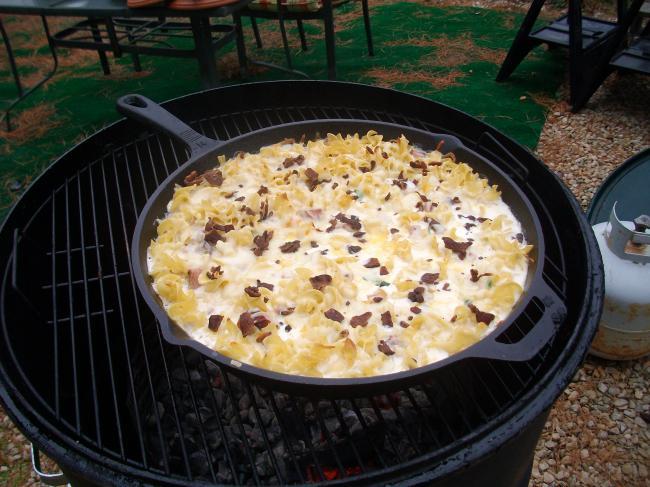 It was 41 degrees with a brisk wind and a slight mist coming down.
My neighborhood heats with wood, so it smelled like winter out there.
I let the dog out of the fence and we spent an hour out there playing while I was cooking this and some Tilapia for the wifey 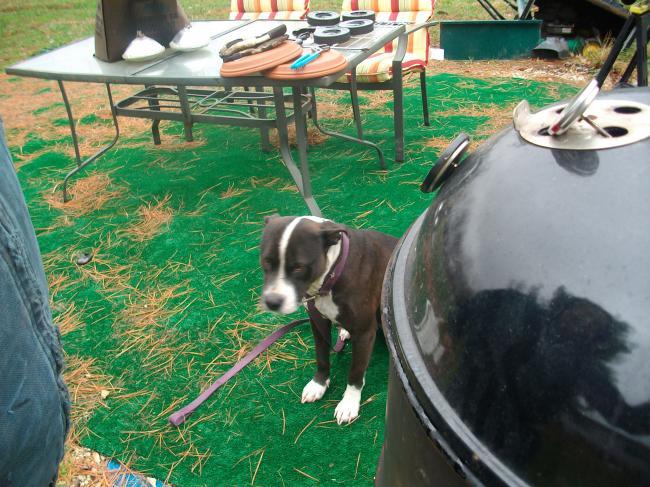 This is how it looked coming out of the UDS 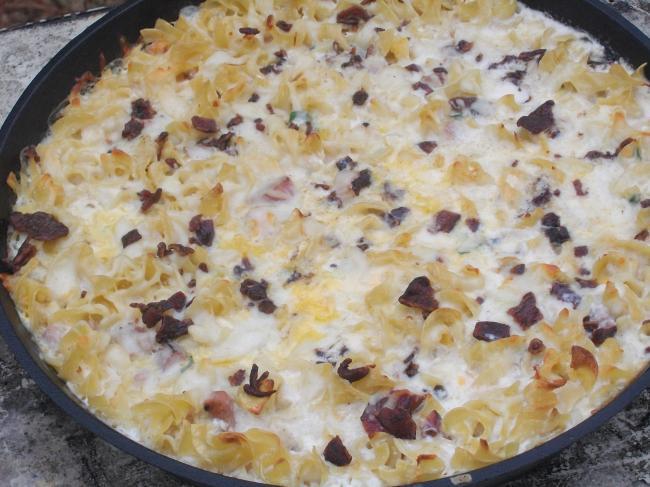 I put most of another package of Italian 5 cheese on top and I used the broiler (inside) to crisp up the top. 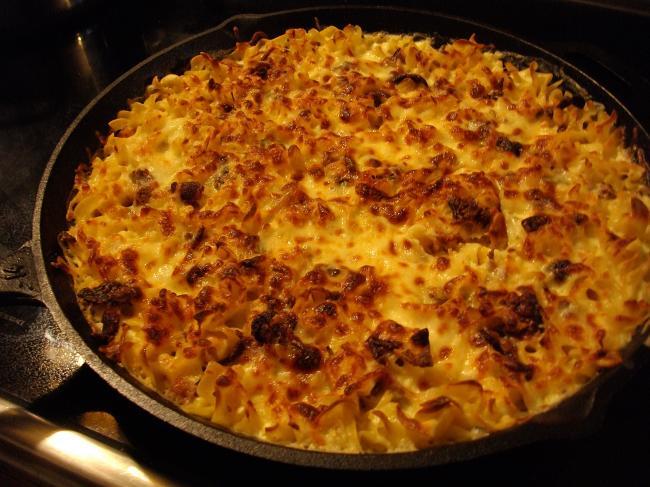 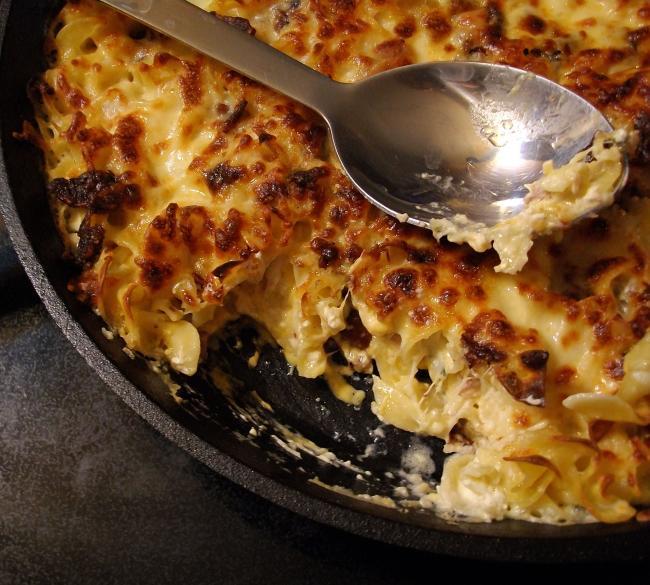 This stuff was GOOOD! 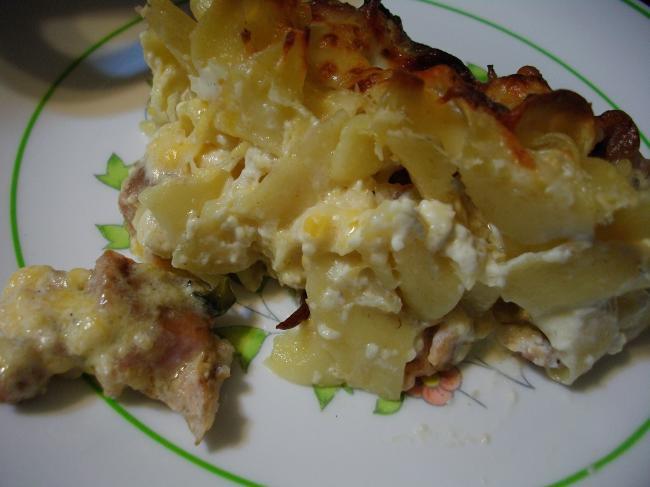 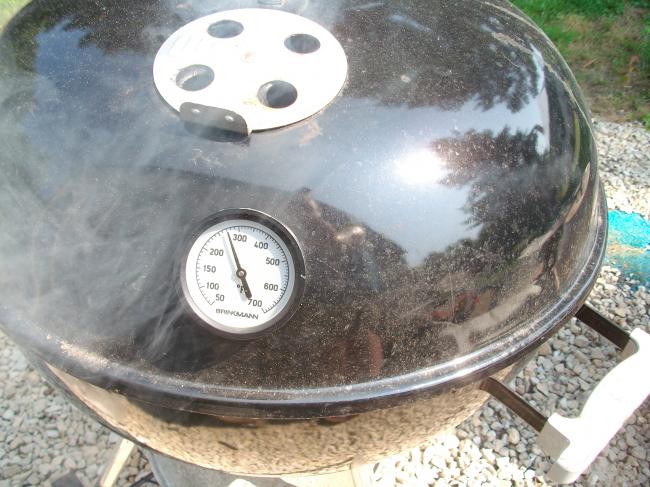 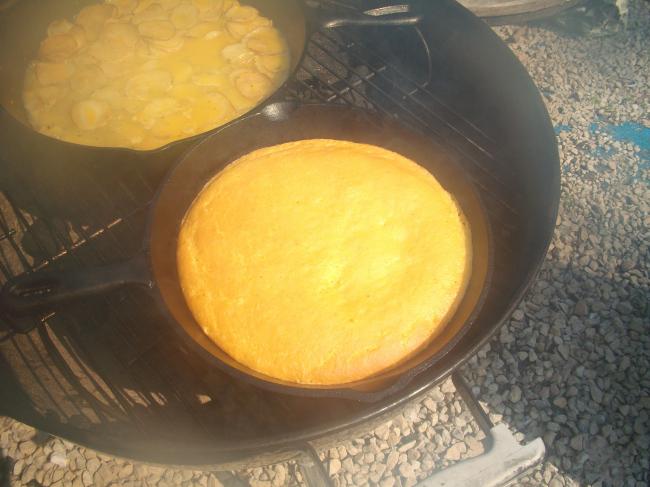 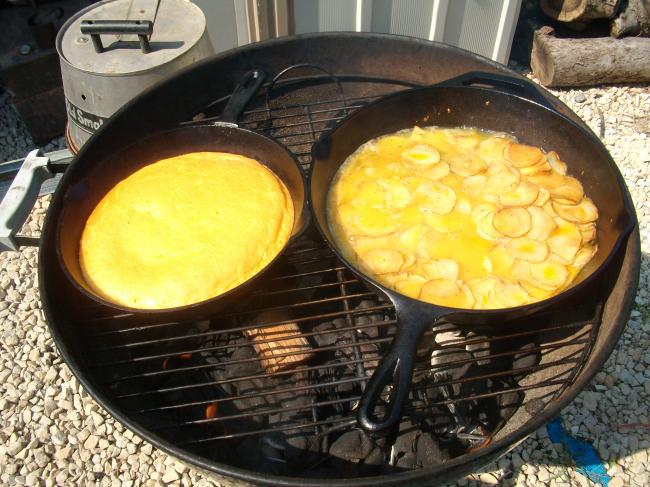 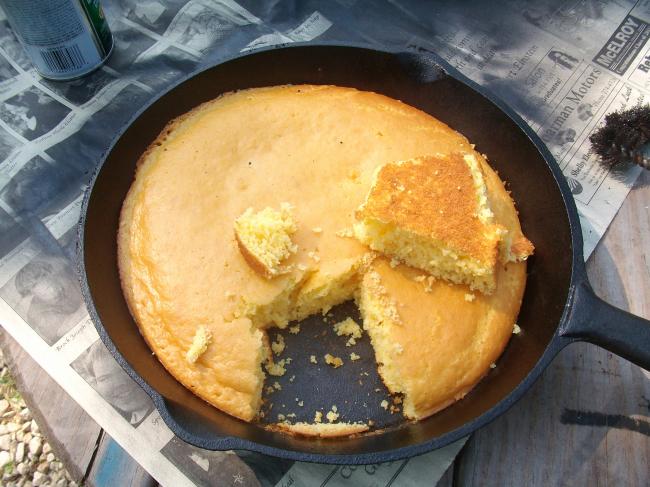 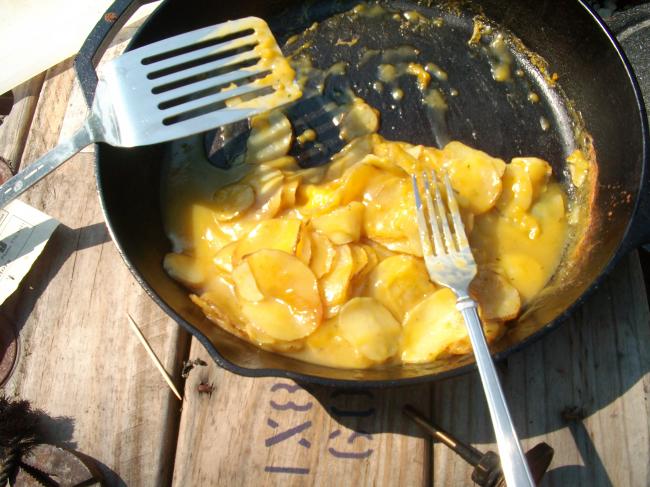 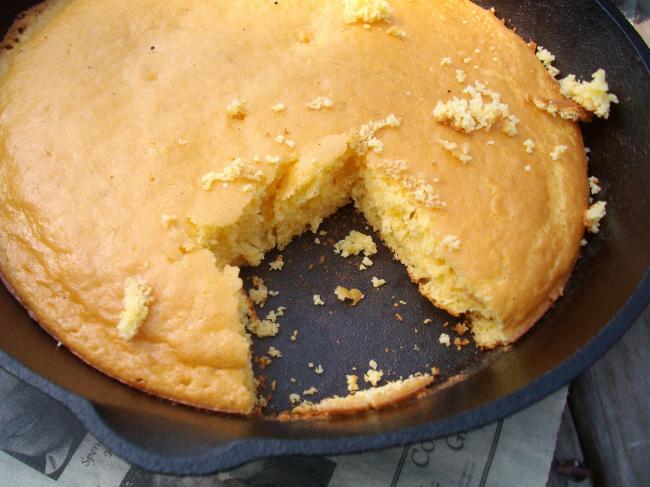 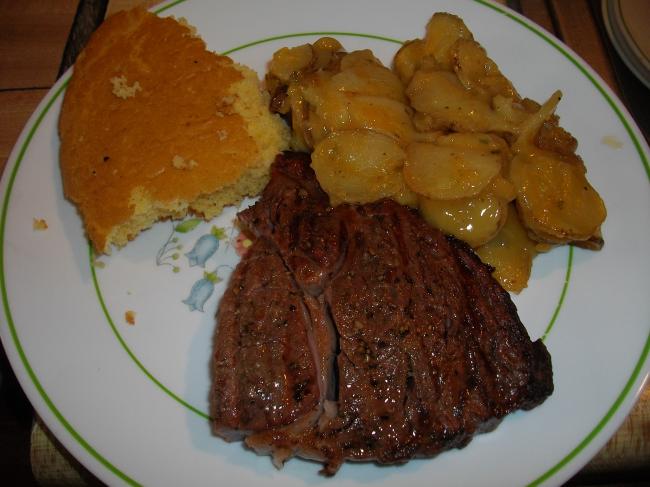 I pulled out the 14" skillet and smoked some lean burger on the Weber using hickory. It was well smoked.
I halved the Serrano's and put a half a pepper in each bell. I used the steamer tray and then realized that it didn't fit in the oven. We moved it to two foil pans and all was good.

The hickory and Serrano's made these very unique and addictive. I ate 6 of them!
Everything was awesome!!!! 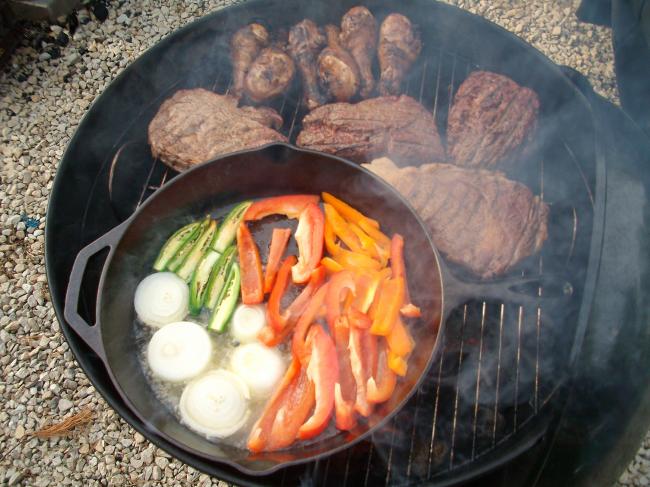 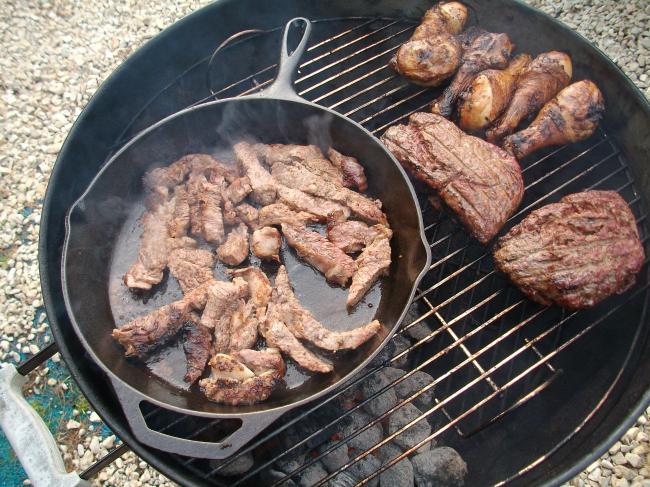 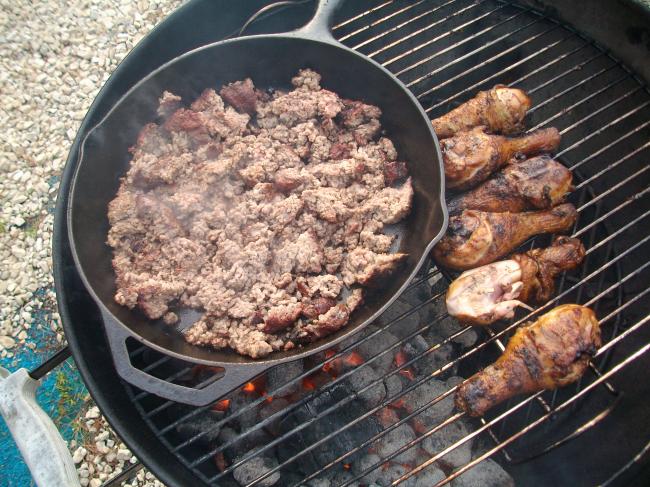 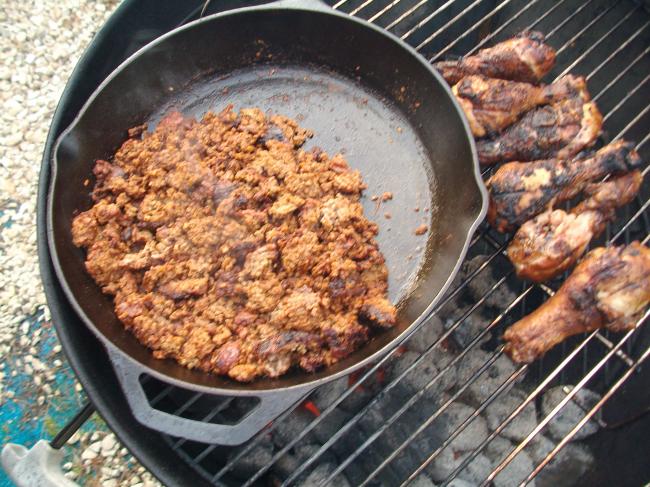 I bought the stuff at Wally World ( or china mart) and folded the dough, then spent 20 mins figuring out how to flatten it again. I picked the best CI from my collection for the job. put on red sauce, sliced provolone, shrooms, tomato, onion, sliced Serrano's from garden and shredded provolone.
I cranked up the smoker to 450 and slapped the pizza on the top rack. it took about 30 minutes to cook and it came out GREAT!!  The bottom was just as cooked as the top. I will cook it about 10 minutes more next time to crisp it up.